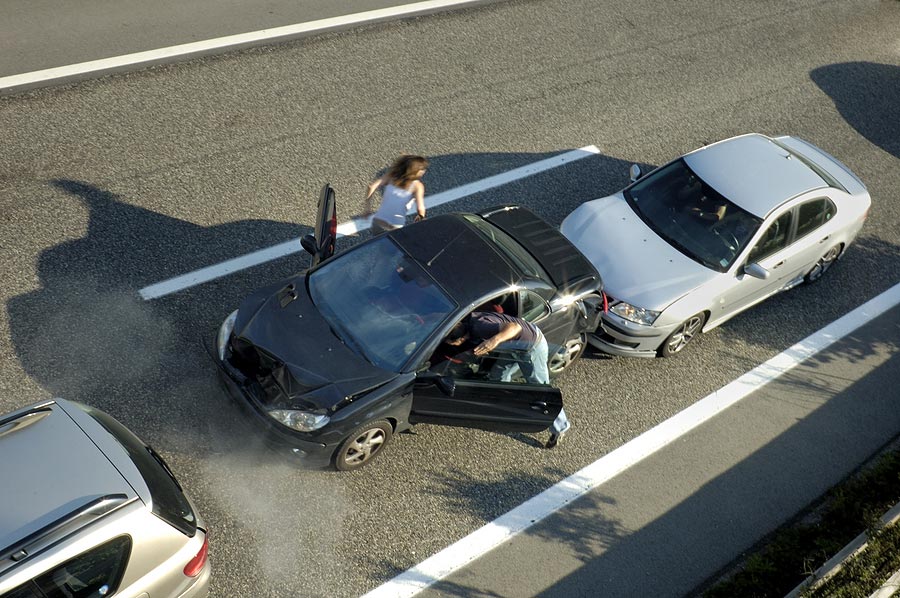 More than 20 million people suffer injuries in auto accidents every year. Whenever there is a car accident, people want to know why it happened. There is research analyzing all kinds of factors related to crashes. The statistics are overwhelming, and it is important to remember that they are more than numbers.

They represent devastating personal and economic loss. Even though there have been many technological advances designed to improve vehicle safety, far too many car accidents still occur. Tragically, many of these accidents are preventable. Understanding the causes of car accidents may help drivers avoid risks.

Why Do Accidents Happen? Driver Error Plays a Role

We often attribute car accidents to sheer bad luck. While there is some chance involved, an accident is often the result of a series of events, some small and some large. According to a National Highway Traffic Safety Administration (NHTSA) study, driver error caused 94 percent of car accidents.

A driver’s eye muscle function, eye movement, and visual perception are critical to safe driving. Impairment due to alcohol, fatigue, or other conditions may cause blurred vision or problems with night vision. Driving at night requires extra caution, as it nearly doubles the risk of a car accident occurring. A driver must constantly be judging the car’s position on the road, the speed and location of other vehicles, the centerline, and more so that they maintain a safe distance from other vehicles and stay in their lane.

Inexperience or inadequate training contributes to accidents. New drivers may fail to recognize dangerous situations or to react properly. Teens sometimes engage in risky behaviors such as road racing. Teens ages 16 to 19 have the highest accident risk, far higher than other age groups. The risk is especially high in the first few months after a teen receives their license. In 2019, almost 2,400 teens in the United States aged 13–19 died, and about nearly 300,000 received emergency room treatment for their car accident injuries.

About 41 percent of the driver-related critical reasons were not paying attention, distractions, and inadequate vigilance. Possibly the most frequent of these are situations in which a driver either did not look or looked but did not see what they needed to do. Another common reason was using poor judgment, such as speeding or reckless driving. Approximately 10 percent were performance errors, such as steering badly or overcompensation.

Reasons why car accidents happen include:

Distracted driving is the number one cause of car accidents in the U.S. today and more than doubles the risk of a crash. Distracted drivers injure over 1,000 persons and kill others every day. The National Highway Traffic Safety Administration defines distracted driving as “any activity that could divert attention from the primary task of driving.” Among the top distractions are talking or texting, talking to a passenger, dealing with animals, insects or objects in the car, adjusting the air temperature, radio, or GPS, eating, drinking, smoking, or outside distractions.

Speeding is the second most common cause of crashes. It causes nearly 55 percent of motor vehicle accidents in the U.S. Drivers often exceed the posted speed limit because they are in a hurry, or they are not aware of how fast they are going. Driving too fast for conditions means traveling at a speed that is greater than a reasonable standard for safe driving—for example, driving on wet or slippery roads, in fog, in construction zones, or in heavy traffic. In fatal crashes, exceeding the speed limit caused 55 percent of crashes, and 45 percent by driving too fast for the conditions. Speeding is dangerous for many reasons. Someone who is driving too fast may not be able to react to changes in traffic, construction, road obstructions, and other obstacles. The driver may have to drastically reduce their speed and, in some cases, may lose control of the car. If a speeding driver is involved in an accident, the impact will be far greater and cause more severe injuries or fatalities. The term “speeding” typically means traveling too fast, but driving too slowly is also a risk and is against the law in Florida. Drivers should obey the posted speed limit but not drive so slowly that they block the flow of traffic, except under certain circumstances.

Driving Under the Influence

Driving under the influence of alcohol or drugs causes car accidents every day. According to III statistics, intoxicated or drugged drivers cause nearly 30 percent of all traffic fatalities. Approximately 10,000 people die in alcohol-related crashes each year in the United States. Alcohol affects the central nervous system. It affects driving skills such as reaction time, judgment, concentration, multitasking, obeying road rules, vision, and overconfidence. Intoxicated drivers may have difficulty coordinating their vision, hands, and feet. Tragically, many drivers fail to recognize the dangers of drugs and alcohol. Repeat offenders account for about one-third of all drivers arrested or convicted of driving under the influence of alcohol, and more than a third of teens believe they have better driving capabilities under the influence of marijuana.

Driver fatigue may be the result of insufficient sleep, long work hours, strenuous activities, or a combination of factors. Most car accidents caused by drowsy driving occur at night. Approximately one in 25 adults admitted to driving while fatigued over the previous 30 days. A sleep-deprived driver is just as dangerous as a drunk driver. Fatigue affects driving skills such as focus and reaction time. According to a study conducted by the AAA Foundation for Traffic Safety, drivers who got only five or six hours’ sleep in the prior 24 hours were almost twice as likely to be involved in a car accident.

A reckless driver disregards the safety of others on the road. Aggressive driving usually involves tailgating, yelling, rude gestures, and similar expressions of anger. Aggressive driving habits include speeding, switching lanes erratically, merging without signaling, and other dangerous driving behaviors. It often starts when other drivers are rude or disrespectful. Often the victims of such discourteous behavior become aggressors themselves. Aggressive driving crosses the line into road rage when a driver assaults another driver or a passenger, uses a weapon or uses the car as a weapon. Data from the AAA Foundation for Traffic Safety shows that nearly 80 percent of drivers demonstrated road rage in the past year.

Tailgating, especially at high speeds, can cause dangerous rear-end collisions.

The law requires manufacturers to design and engineer cars that meet a minimum safety standard. However, a vehicle or components that are defectively designed or manufactured can cause a serious car accident. They can also contribute to the severity of the injuries. Mechanical failures in systems such as brakes, tires, steering, or suspension greatly increase the likelihood of a crash. The National Highway Traffic Safety Administration (NHTSA) estimates that up to 2% of all crashes are due to critical mechanical errors. Even safety systems can cause injuries. Seat backs are one of the most common failures in vehicle safety equipment. Airbags and seat belts can also cause significant injuries.

Some motor vehicle accidents happen not because the driver was careless but as a result of road hazards. Road hazards can include gravel, rough or bumpy roads, uneven expansion joints, fallen trees or rocks, slippery surfaces, construction site obstacles, standing water, or objects that have fallen from a truck or another vehicle. Drivers may lose control of their car or have a tire blow out when they drive over potholes. Drivers should be aware of the risks of dangerous curves on the road. To avoid the risk of a crash, drivers should slow down when approaching a curve but should avoid overturning the steering wheel. Keeping the vehicle close to the outer edge of the turn can reduce the risk of losing control.

Like it or not, we share our roads with a variety of wild and domestic animals. They typically happen on rural roads or highways. Although nearly nine out of 10 such accidents involve deer, the CDC’s crash study also found cows, squirrels, bears, dogs, and raccoons. Over 26,000 vehicular injuries each year are because of animals. They often emerge onto the road suddenly and at unexpected places. Animals are especially difficult to see at night. Drivers may have a direct accident with an animal, but that is not the only possible scenario. Drivers trying to avoid hitting an animal may spin out of control, go into a ditch, hit another car, or crash into another obstacle, resulting in over 200 human fatalities every year.

Even areas famous for beautiful weather, like Florida, sometimes suffer adverse weather. Approximately 21 percent of motor vehicle crashes each year are weather-related. Drivers have a responsibility to drive carefully, taking the weather into account. Weather conditions, especially severe weather, can affect your driving skills. Driving in the rain or on wet or slippery surfaces is the most dangerous weather condition. Rain is dangerous because it makes the roads slick, even if it has not rained recently. Oil residue on the road, mixed with water, creates a slippery surface. Any weather that causes poor visibility is hazardous. Fog is another dangerous condition. When encountering fog, drivers should slow down, allow more distance from other vehicles, and, if necessary, find a safe place to pull off the road.

Drivers must always drive as carefully as possible. When individuals drive in Florida, they owe a duty of care to the other drivers on the road. A driver should take every precaution to always drive safely. However, you cannot predict when or if other drivers will do the same.

Accidents happen. When they do, help is available.

While you cannot eliminate your chances of a car accident, even seemingly small choices, like putting your cell phone away before you leave, can help you reach your destination without an accident.

If you were in an accident, an attorney can explain your legal options. For more information or a free case evaluation, call a Tampa car accident attorney today.