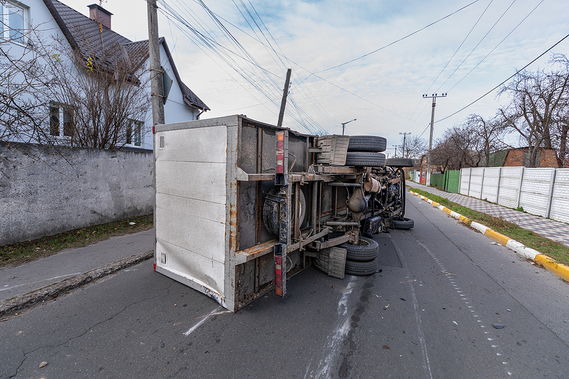 Truck Rollovers: Deadly and More Common Than You Might Think

In Florida, 349 people were killed by truck crashes in a recent year, according to the Federal Motor Carrier Safety Administration (FMCSA). Large commercial motor vehicles (CMV) and other trucks pose considerable danger to other motorists and passersby if they crash, simply because they are the largest vehicles on the road. The weight of a large CMV, especially, can be roughly 30 times that of passenger cars.

Nationwide, 4,114 people died in truck crashes in the most recent year, according to the Insurance Institute for Highway Safety/Highway Loss Data Institute (IIHS/HLDI). Perhaps most sobering, 50 percent of truck occupant fatalities in truck crashes stem from one kind of accident: truck rollovers.

Rollovers cause roughly 9 percent of all large truck accidents, according to the Large Truck Crash Causation Study (LTCCS), a review of accidents conducted by the FMCSA.

What Is a Rollover?

The term rollover explains itself: it occurs when a truck rolls over, either part-way or completely. While rollovers can occur with any vehicle, large CMVs are particularly prone, given their characteristics.

Rollovers pose an obvious danger to truck drivers and other motorists close to the truck. But the danger doesn’t end there. A CMV rolling over can end up across multiple traffic lanes, heightening the possibility of a multivehicle accident as affected vehicles hit other vehicles.

CMVs also carry cargo. The magnitude of a rollover often damages the truck. The crash can throw cargo, or the cargo doors could open, leaving cargo on the road. In an accident of this kind, the cargo poses a significant danger to motorists and passersby.

Rollovers stem from multiple causes, including the following.

Poor or inclement weather, ramp grades, worn tires or brakes, and intersections can all require slowing below the posted speed limit. If drivers don’t respond appropriately, a rollover can occur.

The third-largest number of speed-influenced truck rollovers occurred because of worn or defective truck brakes.

Several other reasons can cause excessive speed, including drivers trying to make up time or meet a schedule, failure to notice posted speeds, mechanical problems with the truck (such as worn tires), and even road rage.

High center of gravity – All vehicles with high centers of gravity may have a higher tendency to roll over and tip, particularly going around curves and corners while going too fast. CMVs such as tractor-trailers and big rigs have some of the highest centers of gravity of any vehicle.

Drowsy driving is a danger on the road. The U.S. Centers for Disease Control and Prevention (CDC) notes that drowsy driving causes 91,000 crashes per year (in all vehicle types), encompassing 50,000 injuries and 800 fatalities. But the conditions CMV drivers work under make them especially prone to sleep deprivation and drowsy driving.

The government mandates that CMV driver hours be limited, partly so that they can get enough rest. But the requirements may not work to give drivers enough sleep. They can drive up to 11 hours before a break and must stop after 14 consecutive hours, but drivers may still experience tiredness or fatigue before 11 hours.

These regulations also limit the number of driving hours per week. However, trucking companies may change shifts that affect sleep patterns and the ability to get enough sleep, such as a sudden transition from day work to night work.

Loss of control – Loss of control over the truck is also a common rollover cause. About 50 percent of “loss of control” accidents result from driver oversteering or understeering, and overcorrection accounts for approximately 40 percent.

Can I Receive Compensation for Injuries in a Rollover?

As most Florida motorists know, the Sunshine State is a no-fault state for car insurance. If you are driving a car and injured in a truck rollover, you follow the no-fault system, turning to your required personal injury protection (PIP) to pay for treatment of injuries, regardless of who was at fault.

Importantly, however, the state does allow injured victims to step outside the no-fault system for serious injury, including an injury likely to be permanent, significant, cause loss of an important bodily function, or significant scarring or disfigurement.

If that’s the case, you can seek damage compensation from the at-fault party in the form of economic damages.

In addition, stepping outside of no-fault allows injury victims to seek non-economic damages, such as compensation for physical, emotional, or psychological pain and suffering.

Tragically, injuries aren’t the only possible outcome of a truck rollover. What happens if your loved one dies as a result?

Florida recognizes that family members may face not only emotional pain and turmoil but very real financial hardship if a breadwinner dies.

Under Florida law, only the personal representative of the deceased’s estate may bring a wrongful death suit. However, a surviving spouse, children, parents, blood relatives, and adoptive brothers and sisters can file if the deceased supported them.

How Do I Receive Compensation?

Compensation in the case of a truck rollover depends on establishing the negligent party. Negligent means that an entity, either a person or organization, owed a duty of care to a person and failed to perform that duty. The “duty of care” in a vehicle accident is (for example) that drivers should follow the law and drive safely, trucking companies should maintain and repair their vehicles, and so on. Failure to do these things breaches the duty of care.

Victims must also show that the negligence directly caused the injuries or death they seek compensation for and did not result from any other cause.

Once you have established negligence, you can either approach the negligent party’s insurance company to seek compensation or bring a suit in civil court. Injured people bring a personal injury suit; family members bring a wrongful death suit.

Establishing negligence in trucking accidents is often complicated, and rollovers are one of the most complicated cases. Many factors can trigger a rollover, and many players can be involved in those factors, especially if it’s a CMV.

These parties potentially bear responsibility for a truck rollover:

Because of the many possibilities, an attorney should investigate a CMV rollover to determine who or what is responsible.

Let’s look at an example. A rollover occurs when a driver loses control on an off-ramp. Data indicate the truck went too fast for the ramp grade and posted speed limit. The driver, however, says that he slowed the truck and braked in plenty of time, but the truck did not respond.

What if new brakes or other parts were used but proved defective? Or what if the original brakes were defective? In that case, parts or truck manufacturers may have been negligent.

Finally, many trucking companies use subcontractors to load and secure their cargo. Too heavy loads can contribute to excessive speed by causing the brakes not to work as well or as quickly as needed. If an investigation determines that a too-heavy load contributed, these companies may also be deemed negligent.

To complicate matters further, the potentially negligent parties may use different insurance carriers with different stipulations on accidents and injuries.

How a Lawyer Can Help in Truck Rollovers

For these reasons, consult a lawyer if you’re injured or a loved one dies in a Florida truck rollover accident. Lawyers are experts at determining negligence and working with investigators to determine the cause of the accident. Investigations and the resulting data can be complicated, but lawyers can use them to form compelling arguments.

Lawyers can also help victims determine the amount of compensation that is fair and just for their injuries.

Sadly, it’s all too common for insurance companies to try and get out of compensating victims fairly and justly. In truck rollover cases, insurance companies may try to claim that you or another party caused the accident, so they don’t have to pay a claim.

Or, the insurer may attempt to settle quickly but for an amount much lower than you and your family deserve.

Insurance companies may also try to argue that you suffered injuries that stemmed from another cause, not the rollover. They don’t have to pay a claim if the accident wasn’t the proximate cause.

Lawyers know the strategies insurance companies use and can work to sidestep these tactics. They can gather evidence about the accident’s cause and the nature and extent of your injuries to present to insurance companies. They can argue and negotiate until you receive the settlement you deserve.

If insurance companies refuse to settle, lawyers can prepare a suit to bring to civil court. Insurance companies typically avoid going to court because of the unnecessary expense, and judges and juries are often sympathetic to truck rollover victims. These uncertainties make litigation a risk that insurers would rather not take.

Contact an accomplished truck accident attorney today to learn more about your rights and how a lawyer can help you overcome the insurance companies to receive the compensation you deserve.

What Are the Most Frequently Asked Questions About Bicycle Accidents?

How to File a Truck Accident Lawsuit