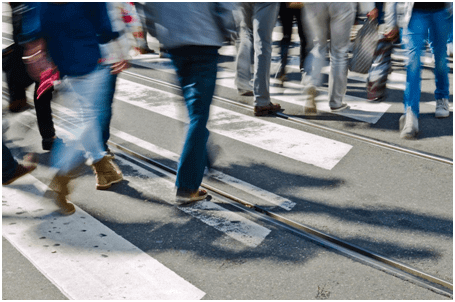 Florida is One of Top Five Dangerous States for Pedestrians

A study released this May by the National Complete Streets Coalition analyzed pedestrian traffic deaths over a decade – and the news was bad overall, but worst for Florida. Run by Smart Growth America, the Complete Streets Coalition aims to change the way most roads are planned and built, so the needs of all users are met. The report, Dangerous by Design 2014, updates an earlier study from 2011.

During the decade, an estimated 676,000 pedestrians were in non-fatal collisions with motor vehicles. That’s equivalent to a pedestrian being hit in a roadway accident about every eight minutes.

The report notes the death toll for vehicle drivers and passengers has dropped by a third during the same period, due largely to safer vehicle designs, greater seatbelt use, and campaigns against drunk and distracted driving.

Far less energy and funds have gone towards pedestrian safety, the report adds, noting the decade’s total of pedestrian traffic fatalities is over sixteen times the nation’s death toll from natural disasters like floods, hurricanes, tornadoes, and earthquakes during the same period.

Closer to home, Florida retained its unwelcome place as America’s most dangerous state for pedestrians. Its 5,189 pedestrian traffic deaths for the decade made up 17.7% of total state traffic fatalities, and for the second time put Florida at the top of the report’s “pedestrian danger index” — which divides average pedestrian traffic deaths by an estimate of pedestrian traffic, derived from data on commuters who walk to work. Only seven states had index ratings above 100; Alabama’s 125.2 rating came in a distant second to Florida’s 168.6 rating (still an improvement from its 182.8 in the 2011 study).

As in the previous report, out of the nation’s 360 major metropolitan areas, four Florida areas held the four top positions on the report’s pedestrian danger index (in order — Orlando, Tampa, Jacksonville, and Miami). Miami and Tampa both made the top-ten list of metropolitan areas by pedestrian deaths as a percentage of total traffic deaths: Miami was fifth, trailing the New York City, Los Angeles, San Francisco and San Jose areas, while Tampa took seventh place, also behind San Diego.

The latest report acknowledges some steps Florida has taken since first heading the list, including city and county initiatives and a new state program on bicycle and pedestrian safety. It also recommends nine ways states can increase pedestrian safety. These include adopting a Complete Streets approach that brings the needs of all users — not just motorists — into comprehensive transportation plans, using all available federal funds for biking and pedestrian projects, and adopting more flexible traffic standards, such as making it easier for localities to adjust speed limits.

If you or someone close to you has been injured by a vehicle while walking, you should contact a personal injury lawyer to learn more about your rights and options. The Fernandez Firm Accident Injury Attorneys stands ready to help you recover compensation needed to deal with a pedestrian traffic injury. To learn more, please call us today at (800) 222-8163 or fill out our free case evaluation.